I didn’t run on Sunday so there was no entry that day. I didn’t try to make it up yesterday because it doesn’t work that way really. It’s not a big deal. An extra day of rest was probably just as good for me.

I’m still in training for work so my schedule is in flux. Just trying to be normal. 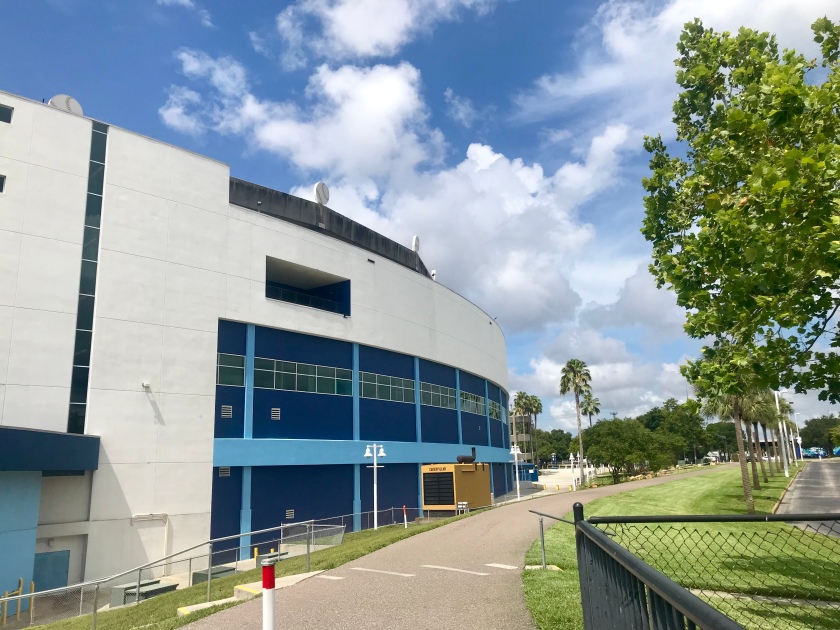 I get to run by a major league baseball stadium whenever I want. That’s a cool thing, but it is this stadium. I think about baseball every time I pass because how can I not, I have a mild affinity for the game. Most of the people I know can’t stand baseball, and that’s fine. Dana is usually willing to go with me whenever I feel like I need to go. I don’t know, baseball makes me happy, whether we win or lose, and we lose most of the time.

The weather today was really hard to run in. It rained heavily prior to my run, and the curtain of humidity left behind hung in the air the entire time. I can almost feel the thickness of the air when it’s like this. I filled the two flasks only and left the bladder empty so I only had about a quart of water for 10 miles. It turned out to be just enough, but I’ve learned (the hard way) that getting thrifty with water consumption is a recipe for disaster. I need to be able to drink freely without worrying about running out. On the other hand, I also need to be conscious of drinking too much if the potential to do so is there, like in a race for instance, when supplies are abundant. I was fine today, though. Got into an ice cold shower and drank lots of water afterward. Ate some salty foods. Overall, a good effort and a good run in difficult conditions, which will begin to be the rule, not the exception, very very soon. Like next week, or the week after. 10 miles, 10:40 pace.

After some food, water, and soda, I almost feel like a person again. Today’s run was 24 miles in the hot, humid heat. If that fence in the photo wasn’t there, I might have jumped into the water. The idea was that having the fence partially in the photo would be cool, but the effect is not quite what I thought it would be. I took another photo where I placed the focus on the fence itself, but that worked even less. Who cares, honestly. END_OF_DOCUMENT_TOKEN_TO_BE_REPLACED

I woke up early this morning to take my car to the shop, again. They didn’t fix what they said they fixed. It’s almost like they did absolutely nothing because the same exact thing happened again. When it rains, the floorboards (not sure that’s the right terminology) under the driver and passenger seat get wet. Wet enough to saturate the carpet. It’s pretty awful when it rains for an extended period of time, because I can’t open the windows to air it out, otherwise the rest of the interior would get wet, too. It gets to smelling like mildew. The mechanic’s explanation, which checks out on Google, is that the sunroof/air conditioning drains are clogged. This is not an intuitive thing. Of course, just when my car seems to be trouble-free, a non-mechanical issue arises. A smelly non-mechanical issue. Honda Problems. END_OF_DOCUMENT_TOKEN_TO_BE_REPLACED

First things first, I’m on a new training plan so instead of the usual 8 today, I ran 12. Pace was 10:18. I had a lot of fun, like most days after a day off. My legs were light and I had what felt like endless energy. I still ran 5 minutes and walked 1 minute for the most part, though. With the new plan, I’ll need to conserve a lot more energy. There are longer runs during the week compared to the home-made plan I was on previously. It was nice, though. Whenever I felt like I wanted to run more than 5 minutes, I did. I just never let myself walk more than one. (I had to make a pit stop to pee in the bushes and that was the only exception. It’s crazy how much stopping dead slows the pace clock, as opposed to walking.) END_OF_DOCUMENT_TOKEN_TO_BE_REPLACED

Excellent effort today. 8 miles at 8:16 pace, with the first mile at 8:32, and the seven subsequent miles all around 8:10 – 8:20. Since it’s been raining off and on, it’s slightly cooler than it has been, but the humidity is high, and the air feels like a soggy blanket. The flowers are blooming all over the place.

From the first step of the run, my legs felt super heavy, which tells me I didn’t fully recover from the weekend. END_OF_DOCUMENT_TOKEN_TO_BE_REPLACED