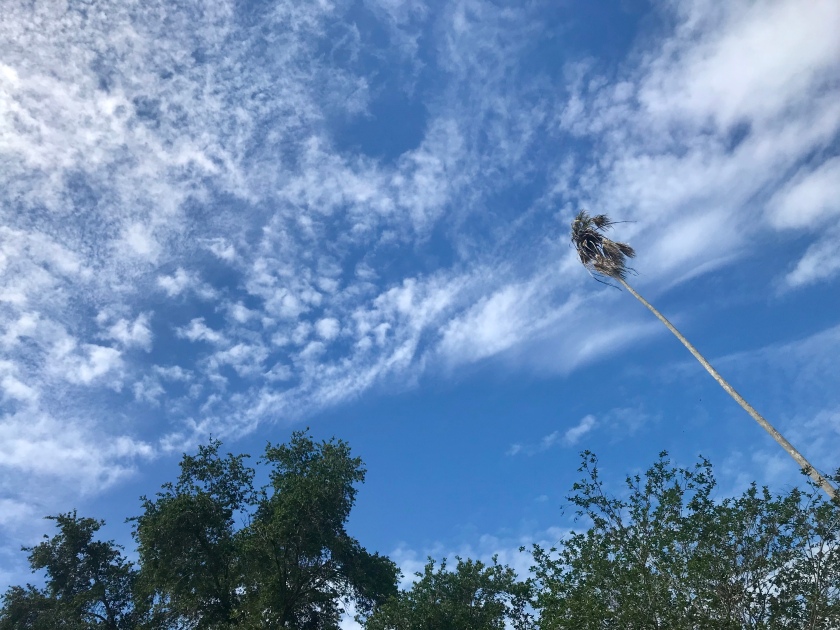 First things first, I’m on a new training plan so instead of the usual 8 today, I ran 12. Pace was 10:18. I had a lot of fun, like most days after a day off. My legs were light and I had what felt like endless energy. I still ran 5 minutes and walked 1 minute for the most part, though. With the new plan, I’ll need to conserve a lot more energy. There are longer runs during the week compared to the home-made plan I was on previously. It was nice, though. Whenever I felt like I wanted to run more than 5 minutes, I did. I just never let myself walk more than one. (I had to make a pit stop to pee in the bushes and that was the only exception. It’s crazy how much stopping dead slows the pace clock, as opposed to walking.)

Photo is from today. I like that scraggly old palm tree.

About the plan change, there are a few big changes to my schedule. Circumstances are such that I will not be able to do the 8 hour timed race on June 9th. More important to me, however, is the Pinellas Trail Challenge, and to be peaking for that race, I had to change to a 50-mile plan. I’m using the Relentless Forward Progress plan for 40 mile to 100k races with 70 mile weeks. When they say 70 mile weeks, though, there are only 2 or 3 I think. I’ll most likely modify the plan. It allows two rest days, Monday and Friday. On Fridays, I’ll probably be itching to at least do 3 or 4 miles, and that should be okay before the back-to-back long runs. A complaint I have about the plan, and another aspect of it that I’ll probably modify, is the lack of the 30-20 weekend. In my first and only 50-miler, being able to complete the 30-20 weekend was what told me I was ready. So I’ll add that to the 50k week.

The Pinellas Trail Challenge takes place on September 1st. As soon as that’s behind me, I’ll jump to the 100 mile plan provided by Bryon Powell in Relentless Forward Progress. Again, with 70 mile weeks. Again, I have issues with the plan so I’ll modify it. I would very much like to run at least one 100 mile week before I attempt to run 100 miles in one day. As far as races-in-training go for this plan, it’s standard – 50k and 50 mile. So all told, I’ll be doing a 50k on July  28th (in prep for the PTC), a 50-miler (46 miles, really) on September 1st, another 50k on September 29th, another 50-miler on November 3rd, and finally the 100-miler on December 8th. I have to figure out how to supply myself with water and nutrition on those runs that aren’t actual races. How the hell am I going to run 50 miles with no aid stations? I might have to ask Dana to crew me. And I can use the trail again, I suppose.

Lots of changes. Lots to be excited about. I registered for the PTC today, so that’s real. Tomorrow is 6 miles and Thursday is 10.