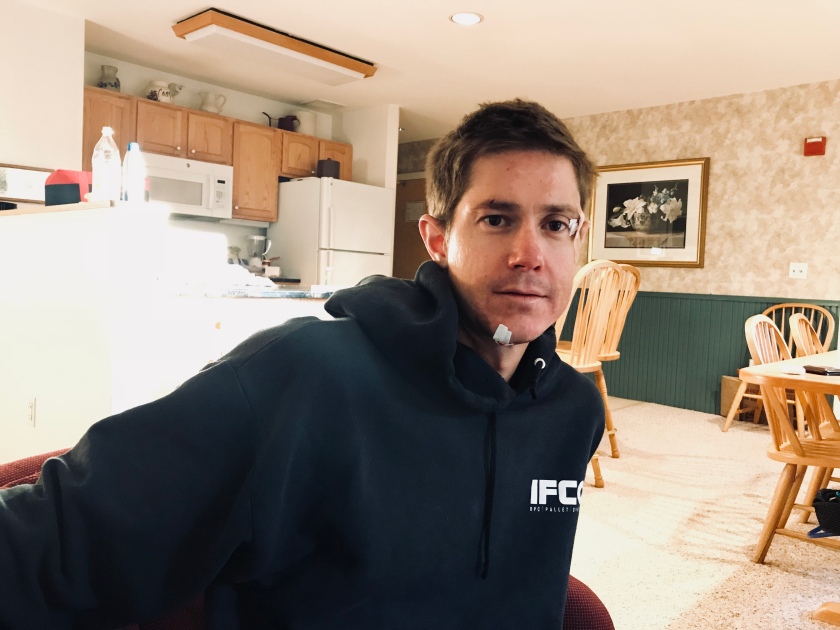 So, after my run today, I came back to the room and got into the jacuzzi tub. The water was really hot and I turned the jets on full blast, thinking it would be great for sore, crampy muscles. I stayed in for about 15 or twenty minutes and it felt so good. Then, I got out and immediately the world started to spin. It was like a really bad version of when you’ve been laying down and you get up too quick. I sat down in the chair they put in the bathroom here for whatever reason. Felt good and stable, my head stopped spinning. Stood up and then, black. Woke up and heard my mom asking if I was okay because there was a crash. I was on my feet somehow, and I answered yes, I was fine. Then I saw blood dripping onto the floor and said, no I’m actually not fine.

I now have a big gash on the left side of my left eye that looks like a less-than symbol. On my chin, there’s this sort of parallel-line double gash on the right side. And on my right eyebrow, there’s a much more minor cut. I look like I got in a fight and lost that fight.

None of it actually hurt hurt, but it was scary as hell blacking out. That’s never really happened to me before under circumstances like these, where I smacked the front part of head. I feel bad for my mom, having to take care of me on our last night here. But, she did a wonderful job. I have the best mom. She even took the photo of me.

I know this happened because I was already dehydrated, and then got into a vat of super hot water. Still doesn’t mean I’m not a dumbass for doing it. Hopefully my face doesn’t swell up too badly. And hopefully the scars look cool. My mom just said, “you don’t have anything earth-shakingly wrong with you so that’s good.” Mom.

About the run today. I got my ass kicked by the run, too. First, the run, then the bathroom. I actually still don’t know what I hit my face on, so I’ll just say the whole bathroom kicked my ass. I’m still glad I decided to do what I did today, run 50k. It’s the bonehead mistake afterwards that I regret. I finished in 6 hours and 1 minute or 2 minutes, I can’t remember and I’m too tired to go get my watch. That’s about 11:40 pace. I thought I would be faster, hands down. It got a little warm here today, about 80 degrees, and I got dehydrated. I ate and fueled like I planned to, but I’m just missing something. I need S-Caps I think. Overall, it was a bit deflating, but I learned where I’m at and what I need to do, or at least what the problem is.

I can say for sure that I’ve had better days.